After Tranmere’s disappointing performance in midweek against Rochdale, which resulted in a 1-1 draw, Micky Mellon’s side have a chance to extend their unbeaten run and turn one point into all three when they face Paul Simpson’s Carlisle United at Prenton Park this weekend.

Carlisle have had a decent start to the season and despite failing to win any of their last three games are placed tenth in League Two thus providing a tricky test on Saturday.

Ahead of the game, I spoke to Carlisle supporter Ben Pitkeathly.

Last season, Carlisle finished 20th in League Two as Omari Patrick finished top goalscorer with nine goals in all competitions. What are your thoughts looking back on the season?

Glad it’s over and in the past. Up until Simmo’s return, it felt like the end, the club looked destined for non-league and never to come back. Key players were sold in the summer and the replacements were cheap options meaning Chris Beech’s tactics didn’t work anymore without the right personnel so he lost his job. Keith Millen came in but couldn’t turn it around but some of his January signings proved to be good acquisitions. A nice guy but too nice for a relegation battle and there was always the feeling he didn’t know how to manage in League Two. Millen was sacked along with failed Director of Football David Holdsworth with Simmo incoming and he galvanised the whole club. He took us on a great run and some of those wins, away at Oldham in particular, will always be remembered. A rollercoaster from inspiration to elation.

This summer, eleven players were brought in either on loan or on a permanent basis. Were you happy with the transfer business over the summer? Did you believe that other positions needed to be strengthened?

I was pleased with the transfer business, we let the majority of the previous season’s squad go so every position pretty much needed strengthened. A good blend of experience and hungry younger players has culminated in a balanced squad with the acquisition of Paul Huntington the highest profile and a key signing in terms of leadership.

Paul Simpson was appointed manager on February 23rd following the dismissal of Keith Millen. What are your thoughts on his time at the club so far? What’s his relationship with the supporters like and how would you describe his playing style?

Simmo’s from Carlisle and just gets it. It’s his second time around after he took us from the now National League up to League One, winning the fourth tier in the process so his reputation was never a doubt. He’s changed everything, the standards at the club are so much higher and he demands the best from every member of staff. Nobody quite expected us to be as high as we have been with this season seen as a transition campaign but he has a special knack of getting the best from a squad which isn’t the most talented in the division. He’s seen as the be all and end all by fans and the crowds have vastly improved since his return. It is hard to sum up quite the impact one person has one a football club and the city as a whole. We’ve played with wing-backs so far and like to play on the front foot but injuries have dictated the set up in recent weeks.

Andrew Jenkins is the chairman of United. Thoughts on him? Would you like to see something being done by him in the near future to improve any aspect of the club?

He’s hung on for too long due to his passion for the club and he should’ve sold up a long time with us now in debt because he can no longer afford to fund it all but Simmo has made him more proactive. He needs to find a way of clearing the debt either by paying it off himself or finding another way but finding a new ambitious owner in the next three years is imperative.

Kristian Dennis has netted eight goals in all competitions this season and is the club’s top goalscorer. Who do you believe are Carlisle’s players to watch and where will the key battles be played out on Saturday afternoon?

We’ve got 11 players out through either injury or suspension so there’s not as many to choose from but Owen Moxon, a local lad who was driving a delivery van while playing fourth tier football in Scotland last season has run the show for us on many occasions this season. Jack Stretton has been in good form recently so him and Dennis up against the Tranmere backline could be the difference between us getting a result. Hunington is hopefully fit and I’d be overjoyed if he managed to stop Kane Hemmings from scoring again as he always seems to be a thorn in our side.

A player who has played for both clubs … Dynel Simeu. What were your thoughts on him whilst he was at Carlisle last season, on loan, and how do you believe he will do against Carlisle’s frontline?

Talented, powerful but prone to the odd mistake positionally. He was a big part of us staying up last season and there were hopes he would return but I do think he gets slightly overrated because of the passion he displays which tends to overshadow his performance on the occasion. He’ll have to be careful not to be pulled out of position by Dennis which could leave you exposed.

What are your realistic targets for this season?

Originally midtable, not quite good enough to go up but solid and unlikely to be in trouble. We’ve surprised a lot of teams so far and I wouldn’t rule us out of sneaking into the playoffs depending on injuries and our January transfer business.

Score prediction for Saturday? The last time the two clubs met was at Prenton Park in early April as Tobi Sho-Silva scored a 97th minute equaliser for the visitors.

Can’t see there being the same excitement this time with both teams not at their best in recent weeks, I’ll go for a boring 0-0.

If you have been keeping up with Tranmere this season, what are your thoughts on them and where do you believe Rovers will finish come May?

Underachieved so far with the players you have, not sure whether Mellon’s magic has worn out or just underperformed. Would still expect them to be towards the top half of the table at the end of the season. 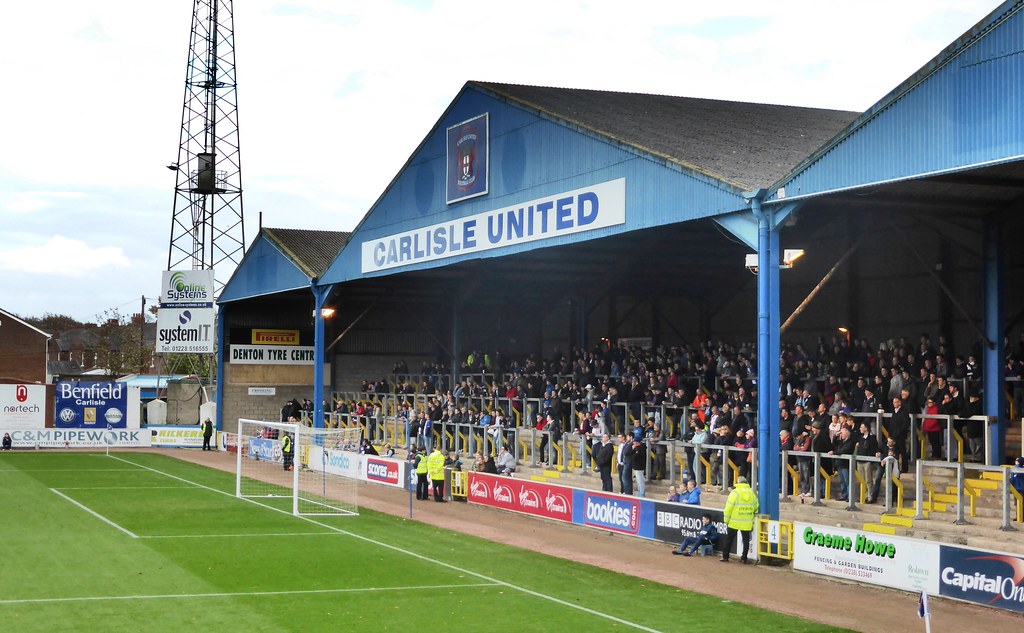 Brunton Park, home of Carlisle United. Next weekend, Tranmere will visit here in the FA Cup first round.