On Saturday, Tranmere Rovers travel to Vale Park to face Port Vale in a League two encounter. With that in mind, I placed questions towards my friend ‘Scott Challinor’ who supports the ‘valiants’. I thought it would be interesting to see the thoughts of a fan who’s club will soon face Rovers, to see their opinions of Tranmere and their opinion on the state of their club at the moment amongst other subjects.

How long have you been a supporter of Port Vale? How did you discover the club?

I have supported Port Vale for, an estimated, 19 years. The 2000/01 season was the first that I can remember, I was six then. The highlight of that season was winning the LDV Vans trophy (now the ‘papa johns’ trophy) in Cardiff with a 2-1 win over Brentford. How the fortunes of both clubs have changed since! I remember clearly, our captain that day, Matt Carragher walking up and lifting the trophy. It was one of the first Vale related memories I can picture in my head and it has stayed with me ever since. I was born into a family of Vale supporters so my dad indoctrinated me and started taking me along to games.

Where did your club finish last season?

Last season Port Vale finished 8th in League Two. We were short of making the play-offs by an agonising 0.08PPG (points per game) after the season was curtailed! Hopefully we can go one better or even further this time around.

What are your thoughts on your current manager? Who is he?

Our incumbent gaffer, John Askey, I’m very pleased with. He came to Vale Park after an underwhelming spell at League 1 Shrewsbury, who won four of his 17 games in charge over a five-month spell, yet expectations were high there at the time after Paul Hurst had taken them into the League 1 playoffs the season prior before departing for Ipswich. At the time, that ill-fated spell in Shropshire was Askey’s only experience managing at EFL level, so some Vale fans could be forgiven for their initial reservations. However, something had to be said for his masterminding of a modern football miracle prior to joining the Shrews, in which he took Macclesfield Town back into the league on a budget of less than £500,000. It was his knack for being able to forge a team greater than the sum of their parts at that level which was largely behind the decision to bring him into the Vale hotseat in January 2019, where he would be tasked with turning around an ailing side in the thick of a relegation fight. Not only did he manage to keep the Vale in the division relatively comfortably after taking a few games to get the team playing his way and buying into his ideas, but after a summer where he was able to stamp his mark on the team and backed by the club’s new owners with a three-year contract, he transformed a side bereft of confidence into playoff contenders within a season. Ten games into the new season, he appears to be managing heightened expectations from the club’s supporters well within the camp, with the Valiants sat within the playoff spots and in touching distance of the top three.

Askey is a stickler for the 4-3-3 formation with a high pressing style, which has been the tactical tweak behind much of Port Vale’s recent success, allowing the team to remain defensively rigid while creating plenty of goalscoring opportunities. It is worth noting at times that he has been subject to criticism for a hesitancy to make substitutions until late on in the game even when things have not been going the way of his team, but after a few early season hiccups, his game management does appear to be improving in that respect. On the whole, I can’t complain much!

What are your expectations for this season?

This season I would like to see us finishing at least in the playoffs, remaining in touch of that elusive top three with a view to sneaking in if possible. After a promising campaign last season, in which we looked primed to reach the playoffs had the season run its course, I don’t think it is unreasonable to expect the club to improve on that and finish in the top seven at least, particularly after such a strong summer of recruitment. With a bit of luck concerning player fitness and availability, I’m quietly hopeful that we could sneak into the top three. Between 3rd and 5th is roughly where I would expect us to finish.

Which one player is your danger man? Why?

Overall, I would say David Worrall. He is a conventional winger capable of playing on either flank and can even slot into the centre of midfield or a number ten role if required. His relentless work rate is a consistent element to his game, he is willing to track back and he always looks to take on his fullback when going forward and has the ability to deliver a dangerous cross into the box: very much a striker’s dream for forwards such as Tom Pope, who I anticipate will be starting too.

What is your score prediction for the match at Prenton Park?

You won’t like this one but 2-1 to the Vale! After dispensing with Mike Jackson I expect a reaction within the Tranmere camp and that will make for a tight game, particularly with the attacking players included in that arsenal of options. However, with Vale in hot form and key players such as Scott Burgess, David Amoo and Tom Pope back in the team and producing the goods of late, I think we’ll have just enough to see off what I anticipate will be a stern challenge. I do expect Tranmere to quickly rise up the table over the coming weeks with the right managerial appointment, so a win here could be a valuable one for us in the context of the whole campaign.

Random fact about your town/club?

Two of Port Vale’s most famous fans include pop sensation Robbie Williams (who had a hand in designing this season’s kits) and darts legend Phil “The Power” Taylor. Other than that, a more obvious fact is we aren’t named after a place! It’s widely speculated that the name Port Vale is derived from the building in the district of Longport where the club was founded, or the local Trent and Mersey Canal network.

Do you support/like any other club other than Port Vale?

I always look out for Derby County’s results because one of my best friends is a lifelong supporter. We’ve played the Rams in a couple of good spirited and highly entertaining pre season friendlies in recent years too (one which finished 5-3), so I always wish them well. Other than that, I follow OGC Nice in the French Ligue 1. I studied languages at university and spent eight months on a work placement in the city of Nice and put my spare time to good use going and watching them in the 2015/16 season. A certain Hatem Ben Arfa was their star man at the time. I was privy to their fixture against a star studded PSG team and a very impressive 3-0 victory at home to a Lyon side with Alexandre Lacazette leading the line. Nice finished 4th that year and qualified for the Europa League!

Promotion in 2012/13. From the beginning of the League 2 season in administration, few would have predicted that we would end up securing passage to League 1 with a game to spare. Everything about that year was magical. Boyhood Vale fan Tom Pope  scored 33 goals in all competitions for us that season and was deservedly named League 2 Player of the Year. I’ll also leave a special mention for Pope’s goal in our FA Cup tie at Manchester City last season: a textbook header which sent 8,000 travelling Valiants wild. Not only did we manage to score against the defending champions of England who regularly hit six or seven past clubs bigger than us without conceding, but that goal saw Pope surpass Martin Foyle and become Port Vale’s post-war record goalscorer. I’ve never been so happy with a 4-1 loss!

What is your opinion of Tranmere Rovers?

I do view Tranmere Rovers as a similar club to ourselves, by that I mean: historically higher than League 2 and happening to have fallen on hard times. Much like us, Rovers can also consider themselves very hard done by to be where they are given the way that last season ended. In another world, we could well be previewing this game as a League 1 fixture.

To focus on the harsh reality however, Rovers have undoubtedly had an underwhelming start to the season which I think has surprised a few that may have tipped them to be up there. However, seasons are not won and lost after ten or eleven games and with players such as James Vaughan, Jay Spearing and Otis Khan coming through the door over the summer, I expect over the course of the season that such quality will tell and I wouldn’t be surprised to see Tranmere steadily improve and be in and around the top ten by March/April and looking to mount a late playoff charge. That 2-2 draw at Salford shows just what even a depleted Tranmere team is capable of doing with the right application.

I am hopeful that we can cash in on Rovers’ poor run of form to maintain our momentum in the league here, but I am expecting a difficult game. Sooner or later Rovers will pick up and a win in this game could prove vital at the end of the season.

I would like to thank Scott Challinor for his time answering the questions that I placed towards him, this league encounter should be an interesting occasion and I hope that readers enjoyed this Q+A. 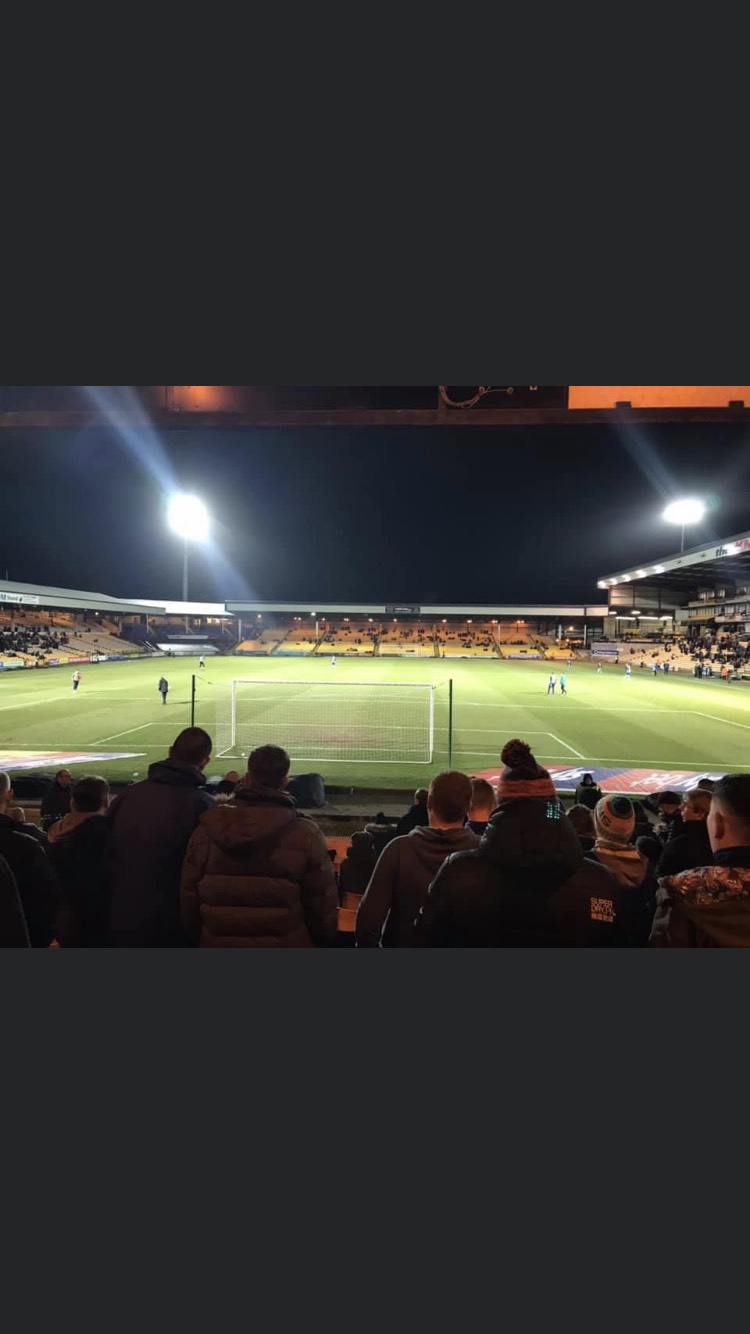 (A photo from my seat when I went to Vale Park in February 2019. James Norwood scored two as Tranmere were victorious 2-1)